Pain management, when it's okay to laugh at funerals and why the bottom must hold.

These days, I walk around holding my intestines in my hand.

It means that I am living in fear of the next bad news.

And once in a while the fact that I cannot find the other sock in a pair.

We buried my friend yesterday. Between two tall trees that end in an eternal shade.

Her skin will no longer burn from the UV rays that kept her indoors.

Eventually, she will blossom. 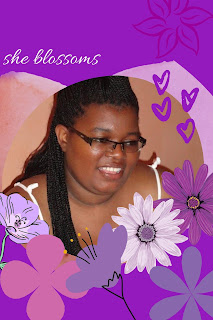 My friend Juliet suffered pain. But she knew the skill of pain management.

She lived to the full between one painkiller injection and the next.

She once told me

'If it wasn't these painkillers, I would have ground my teeth to powder by now.'

Pain management is an expensive affair as well.

She was a writer and spoke about her condition every day.

Not to be pitied, but to help others living with lupus to be understood by society.

We would be in the hospital at 11.00p.m, doctors and nurses and the reception and most times the watchman, trying to find a vein in her hands and arms and sometimes feet. The Watchman who I think also did some lab work always found a vein after slapping the poor woman's inner arms several times.

I believe the last few years when she was totally dependent on the painkillers, her body took every kind of beating, but at least she could have a few minutes to talk to her mother, read and write.

When I grieved and got disappointed and nearly went to the bottom of human emotions and remained there, she said, 'maybe you should speak to someone.'

She then would stay up with me at strange times in the night and listen to me talking about things that didn't make sense.

I appreciate her for that.

I am also a big cowardly chicken, she understood that.

When we were writing her story, for the eulogy, I kept thinking, would Juliet say we used common language? Did we misspell anything? Does this story reflect the life of a writer/ editor/ literature lover?

I told my friend about it and she asked?

' Is that what you are going to ask us when you get resurrected?'

'You need to tell us what to write in yours so you can proofread right now.'

She has dark humour. It's the best.

She is the one that asked me after telling her my mother was dead, ' does the man know her baby mama is dead?'

And make laugh inappropriately, to the chagrin of my

I told her I am determined to watch Armageddon live.

But just Incase I said, she should put a reminder to plant thorns and aloe vera on my grave.

And tell them to write :

Here lies a woman bitter of soul and thorny of countenance.

I got distracted at the gravesite. It was a very calming walk.

It somehow blows up the bubble you have been floating on. The bubble that. Tells you you are special.

You are not special.

It's peaceful in the graveyard.

After many deaths and eulogies in my adult life, I've come to know that no one can really write your story.

When we finished Juliet's story, her friend asked me, do you think we should add her mother and brother's name?

He mentioned to me later that it seemed kinda off to have the names of her Animal family and nothing on her human family.

It had not occurred to me. 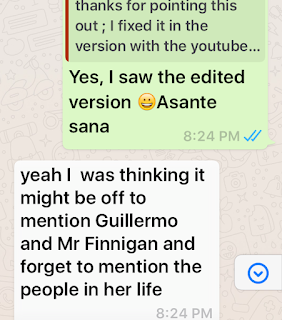 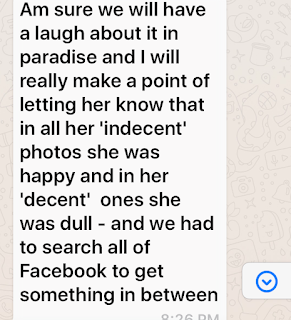 And I thought that is exactly the kind of discussion I and Juliet would have. How dressing up made her grumpy.

I knew a woman at Umoja 1 market, who shocked my aunt for telling her she had just come from the studio to have a portrait picture of her done. Mbica ya Kīrengo.

One that would be good enough to use at her funeral.

I was maybe 12 and thought that was a very good idea.

But we don't like to think about such things.

I think it's a good idea to have a folder of good pictures, perhaps in the top drawer in your cabinet where people can easily access it after you clock out.

And a list of phrases that best describe you.

Things that describe you beyond your primary school and high school education.

'Sneaked in roasted maize to class in class six and got suspended for a week.'

'Almost drowned in the neighbour's fish pond at 9 years old.'

The Bible mentions that in the last days there will be itua nda, news that cut your stomach in half.

Do you ever feel like you are living in Season Finale of a thriller?

The part where, everybody dies.

The last three weeks I have received news of death every single day.

I lost a friend this week, and I am not sure how I feel. I felt cold, then I was irritable, then caught myself staring at one spot for many minutes, then couldn't find anything to wear so I arrived at work at 4.00 pm.

Juliet, was awesome. Even when laying in a hospital bed at 11.30  in the night with a UV drip attached, for pain killers, she would be asking your opinion on pop culture, African writers, relationships and the theatre.

I could never bring up a topic I didn't understand very well, she would argue it in all directions then I would be sitting there wondering- What do I even know?

But that is not what made her awesome.

It is her attitude towards life and death.

She would tell me "I was sure I would die last week." Then go into detail about what new flare-up she was having at the moment. But not in a woishe manner. Just facts. "I am sick, I can't feel my toes, that is my life yeah,  please may I have a pancake."

She is the most grateful, sick person I know. (I can't use past tense yet)

I could boil a potato for her and she would act like I had just prepared lasagna for her.

She gave me books.

She gave me a dress

She gave me money

Death is close. I often wonder if I am living as I ought to, in relation to my sure mortality.

Your Shallow and Incomplete Guide to Cooking Food

For People who live alone or with cats and are tired of eating maize meal with eggs every night. 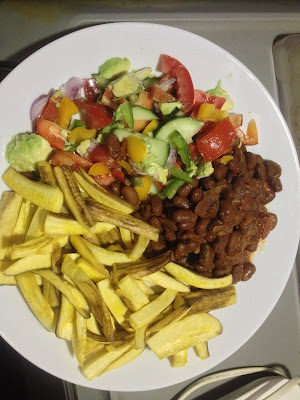 How to enjoy green bananas

I have a new neighbour;
And she sent her house manager with a bowl of green bananas to give to me.

I received it with thanks. I was surprised, we live in a world where neighbours fear one another, regard one another suspiciously and complain to the landlord behind your back.

If you try to be kind a negative motive is pegged on your goodwill, so you also stop trying and mind your business.

----------
But I do not say no to food. No. Even if you bring me yams and I have no idea how to begin cooking them I will spit in my chest and pray that all the farms you grow your crops on produce one hundredfold.
----------I like green bananas. There are so many ways to cook them.
I sometimes fry them in a beef stew.

Other times I bake them in coconut.

I don't know which bananas mash well and which keep looking at you after the potatoes are completely mashed.I had boiled some beans.

Yellow beans, which I discovered in an unlabelled icecream container, all this while I had been assuming it was Maizemeal.
---------
I don't cook yellow beans.

But we've been eating all these other beans since '53.

And it was well acknowledged that beans give you gas, and make you fart.That's what beans do.
So you eat them on the days you will be working out in the open air or alone in the office.No matter how many times we interbreed them, beans will be beans.
------------
It's a conspiracy.
------------
So instead, I strictly cook the underdogs of  the beans society.Beans with expletive names like:

'Birds' poo'
'The somersaulter '
'Big Field Mouse'
And, the tastiest, 'Flowers'
-------
I eat avocados quite often now after someone told me that:

A. They are good for women. Don't ask me how.B. They create an alkaline environment that discourages the growth of Covid-19 virus in your body.

I eat avocados in salads, between bread slices, in smoothies and with a tea spoon, standing in my kitchen with a sink full of dirty dishes.

I talk to myself when I am eating an avocado. Things like "oh this is so sweet, Gathoni when last did you eat such an avocado? You should certainly go back and buy ten of these, honest, truly."

For this, I sliced the bananas thinly and deep fried them, made a salad, added the cooked beans and life was never better.

The Shallow and Incomplete Guide to Cooking Food is back.

The Covid-19 Pandemic has surely challenged our common way of life. 😫

Are you trying to adjust to new working methods?

Or has your loss of a physical job made you rethink your work preferences?

Angie Koh, a retired English teacher and former researcher share tips on finding the right online work suitable for you.

She also talks about the importance to keep on sharpening the skills you already possess to give you an edge.🚀

At the beginning of the year, I decided to do something that would not only benefit me but my followers as well.

I started by posting book quotes, and that went on for 12 days on Instagram.

Then an idea came to mind, that over the years I have made connections with many smart, knowledgable, yet humble people.

People who have always been ready to share what they know with me.

So far I have interviewed 15 different people on various topics.

I will be sharing the interviews here every week.

To start us off,

I had the pleasure to interview my friend Shawn, a science teacher of the modern age.